If you have kids, most likely you have tons of broken old crayons lying around. I find my son’s crayons in his bin, drawers, toy chest, and behind the dresser. With all that has happened, with schools closed and camps cancel nationwide, due to the COVID-19 pandemic, I wanted to share some positive colorful projects worth enjoying. Although some states have slowly re-opened, beaches are opened but some public pools are still closed. But with all the sudden adjustment we were forced to make due to the COVID-19 pandemic, why not make it fun colorful time with our kids. As a busy mom on the go, I wanted to share 10 easy crafty ideas to do with crayons and the joy of coloring.

In 1885, cousins Edwin Binney and C. Harold Smith took over the New York base Peekskill Chemical Company, known for pigment such as red oxide to paint barns and carbon black used for making tires and shoe polish in which they used to extend their useful lifespan.

In 1900, The company started producing school supplies because the cousin saw a need in school supplies. They created the very first dustless chalk and slate pencils for school. In that year Binney & Smith developed and introduced the new wax crayon to mark crate. Since the new wax crayon for marking was loaded with carbon black and too toxic for children Edwin Binney and his wife, Alice Stead Binney a school teacher started looking into non-toxic coloring crayons. In 1903 they developed a product line of non-toxic wax crayons and Crayola Crayons were introduced. Alice Binney named them ” Crayola” combining the French word craie meaning “chalk” and the Latin root ola from “oleaginous,” meaning “oily.” The first box they sold — the one with eight colors — cost just one nickel. 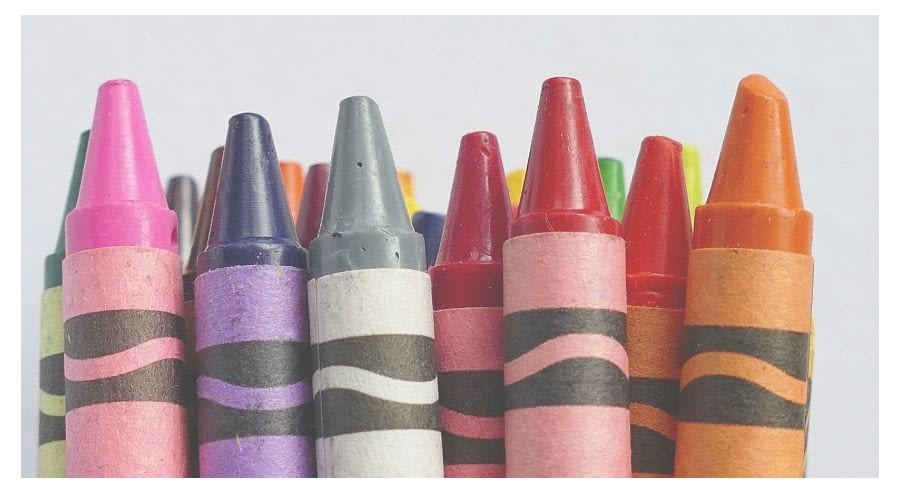 There is an actual National Crayon Day, which is on March, 31st. But if your kids are crayon lovers, entertain the kids with colorful projects and that’s including you. I’ve rounded up 10 Crafty Projects to do with crayons for some summer fun. If you are a mom taking precautions and find yourself still practicing the stay home shelter while this pandemic is over, here are some fun colorful ideas.

With all that’s going on with the social distance, create hand made cards with construction paper, crayons, chalk, and markers. The United Postal Service is still working, send them to the first responder at the front line. Also if you have love ones, that can’t come out make them a handmade card. I’m sure they would love to see a hand made card from their grandkids. If you know of anyone that’s alone during this pandemic, send them a gift basket along with hand made card.

Melted Crayon Butterflies are soooo cute and fun to create. Fold the cardstock sheet in half. Draw outlines of half butterflies along the crease of cardstock. Sharpen unused crayons to create shavings. Unfold cardstock, sprinkle in shavings, re-fold, and place parchment paper on top. Mom (or any adult) has to iron parchment paper on low heat for 1 minute. and then cool for 15 minutes. Once it’s cool down cut out butterflies and unfold.

Melted Crayon hearts- Take a heart-shaped silicone mold and all those unused broken crayons your kid has in their crayon bin. Placed all broken crayons inside a heart-shaped mold and bake crayons at 230 degrees for 15 minutes. You can either glue them onto an envelope stick them inside a small cellophane bag and sealed with thank you stickers. If you want to add the homemade cards and send them to someone that you know is alone during this pandemic. You will definitively brighten their day.

Crayon Art T-Shirt, you will need sandpaper and color design on it. Once you color your design place cardboard inside the t-shirt. Make sure you place the sandpaper design face down on the t-shirt. Place parchment paper on top of sandpaper. Mom or any adult iron over design on low heat 3–5 minutes.

Animal DIY Bookmark– Encourage your kids to read and at the same time create cute and adorable bookmarks your kids would love.

Crayon Play-Doh-  Making homemade play-Doh is super easy and you might not have to go out and buy you probably have all the essentials right in your kitchen. ( Flour/ Water/ Cream of Tartar/ Salt/ Vegetable Oil/ old broken crayon /Food Coloring).

If you don’t want to make it from scratch you can always buy the clay kits.

Paper Plates Craft is such an easy choice to create beautiful art crafts and is a kid favorite. Paper Plates are super CHEAP to buy and it will keep your kids busy for hours. You can create just about anything, paper plate Llama, Unicorn paper plate mask, Easter Bunny Mask.

Inspire move creativity in your school and help meet curriculum standards with CreatED activity kits for kids and learning resources for K-8 educators on STEAM, literacy, and project-based learning. Check out other Learning Sets that prepare students and families with academic and life skills through creativity. CreatED resources are a great way to engage with kids using art-rich teaching strategies that build creativity, communication, critical thinking, and collaboration—while reinforcing curriculum standards.

Kids create their very own scrapbook. The included Crayola art supplies in this set are also great for everyday crafts, art projects, and creative play.

Perfect for beginners, this hand lettering guide and tool set has everything you need to master the simple, yet stunning art of #Crayoligraphy calligraphy.

Gather the supplies for craft expert Beth Kingston’s adult summer camp and follow along during Let’s Craft with The Kingston Home, starting August 8 and continuing every Saturday at 7pm ET through September 12. Watch Beth’s step-by-step instructions and create alongside her with these Crayola Craft Kits, plus a few supplies you have at home. You can watch then or replay later, too! This Adult Summer Camp Craft Kit allows you to pick the Craft Kits you want to create and skip the ones you may already have on hand. It’s a fun at home summer camp for adults to help you relax and stay creative!

I’ve always been a FAN of Crayola since I was a kid, but with the uncertainty times we are living, our kid’s school year is up in the air. If you decide not to take the chance of sending kids to school and homeschooling permanently check out Crayola’s  Free Lesson Plans

. Their site is packed with so many educational, activity for kids.

What summer craft activity did you do with kids? Love to hear all about it. Leave comments below.

I'm CC a MOON child. I'm a First Responder, Military Wife, and a mom to an amazing Kid. There is so much in life that we may not be able to see, we should still pay attention to the unseen because it does exist, and we do need it! Read More…